Alençon is the capital of Orne Department in the Lower Normandy region of France and is located roughly 100 miles west of Paris.  It is also the town where the first Forget dit Despatie of my line came from prior to emigrating to New France (Canada) around 1650.  The town was spared the large scale destruction of World War II and therefore retains many historical buildings from its early history.  Surrounded on three sides by forests, Alençon is relatively quiet today and off the tourist trail, but it is a historical town with a colorful past.  Historians believe the town was settled around the 5th Century A.D.  The famous Duke of Normandy William “the Conqueror” laid siege to  Alençon in the mid 11th Century.  Town inhabitants supposedly hung animal skins from the town walls in reference to the fact that Williams’s mother was the daughter of a tanner.  The story goes that when William eventually conquered the town, he ordered that all the inhabitants have their hands cut off!.

In the 15th Century, the town became a dukedom and was traditionally given to the younger sons of French kings, a practice which lasted up until the French Revolution.  Two of the towns more famous inhabitants were named Marguerite.  Marguerite d’Alençon (also known as Marguerite d’Angoulême and Marguerite de Navarre) was the sister of French King Francis I and the wife of King Henry II of Navarre (by her second marriage).  She lived in the town for more than 15 years and was known as a generous patron of the arts and a mediator between the Catholic Church and the nascent Protestantism in France.  Marguerite of Lorraine was the grand daughter of King Rene of Anjou and married to the Duke of Alençon and held her court in town. 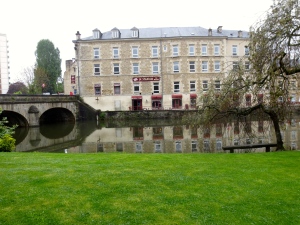 Alençon also became known as a world-famous producer of a unique elaborate and delicate lace (point d’Alençon) around the 1600s that employed most of the women in town in the local fabric industry at the time.  It is said that a French King even established a Royal Workshop in the town to produce this lace in the Venetian Style for the French royal court in order to reduce the costs of importing such lace from Italy.   Although demand eventually declined, it survives on a small-scale basis today, and in 2010 UNESCO added the craft to its Representative List of the Intangible Cultural Heritage of Humanity. 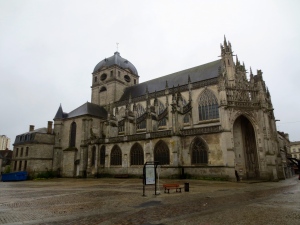 A focal point of the town is the gothic three-story Notre Dame Basilica.  Construction began in the early 1400s and continued until the beginning of the 16th Century.  There are 11 stained glass windows that date from the 16th Century, the ornate altar is from the 18th Century, the great organ case was inaugurated at Easter Mass in 1540, and the

sculptured white stone pulpit dates to 1536.  The Basilica is a pilgrimage point for admirers of St. Thérèse

of the Child Jesus, who was born and lived in Alençon.  Notre Dame is also where my ancestor Nicolas Forget dit Despatie was baptized in 1620 and where he worshiped before leaving France for the New World around 1650.  Records would appear to indicate that Nicolas’s parents were also baptized and married at the Basilica meaning that at least two generations of the Forget dit Despatie family lived in Alençon (and possibly more). 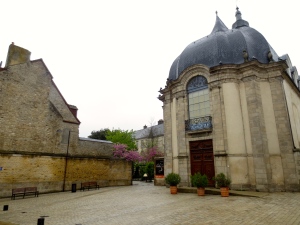 Alençon is a quaint and historical town that retains much of its artistic charm, particularly in the town center.  Cobblestone streets, a gothic Cathedral and many Renaissance-era buildings all contribute to Alençon’s heritage and the impression of a town that remains much as it did when Nicolas Forget dit Despatie roamed the streets some 400 years ago!