Gillingham is the northernmost town in Dorset county, in Southwestern England, located approximately 110 miles west of London.  According to records, the area in the town’s vicinity was originally inhabited by Celts and later settled by Romans.  Gillingham was first settled by Saxons, and the name was used in the Saxon town charter in the 10th century.  There are also references to the town in the latter Middle Ages as a site of a large battle with Vikings (the Danes) and during the Black Plague, when nearly half the town died from the disease.  According to some sources I’ve seen, the meadows now filled with sheep just outside Gillingham “contain the remaining banks of King’s Court Palace where King John hunted deer and boar between 1205 and 1214.”

The history of my branch of the Greene family begins in Gillingham after Robert Greene “the gentlemen,” my 16th maternal great grandfather purchased an estate just outside the town in the late 15th century.  The estate was known as Bowridge Hill, and after Robert three succeeding generations of Greenes of my line were born and raised there.  Robert’s great-grandson John “the Surgeon” was the last of my line born at Bowridge Hill, and he subsequently became the first Greene to settle in “the New World.” 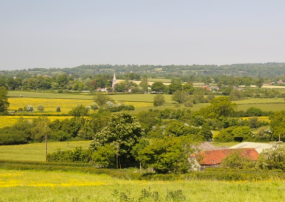 The town still has a few buildings which date from the 15th-16th centuries, including parts of the St. Mary the Virgin Church, where the gravestones of many Greenes remain.  The town bridge (photo below) was sketched by John Constable, and his painting of the bridge is now in the Tate Gallery.  Today Bowridge Hill is largely unoccupied but still offers beautiful green landscape views.